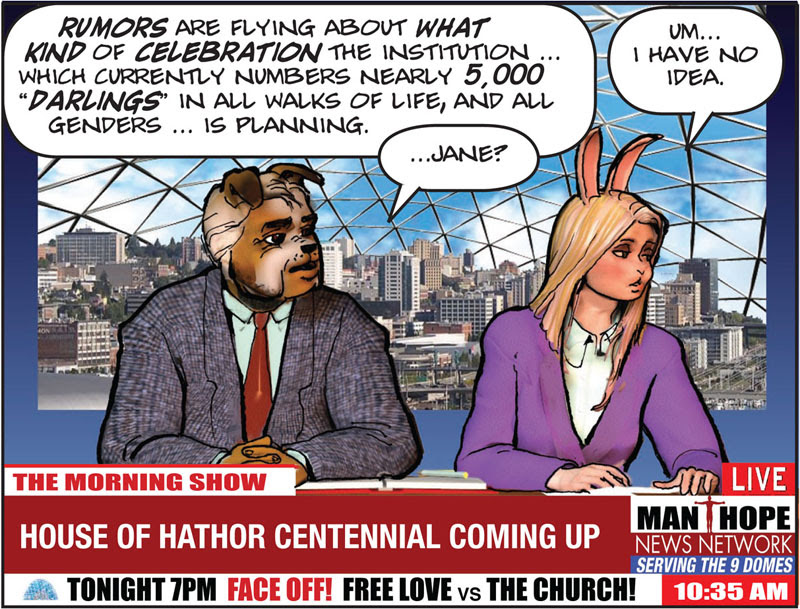 "The Flower Chamber," after much pre-production, is being drawn and painted at last, and I am now working on page 6 of the first 12-page installment done.
If my trusty old computer doesnt explode doing this work, things will be progressing with much more speed now. (If it DOES explode, I have everything backed up, and all the backup backed up, too.)
This first installment, which introduces the Domed City of Manhope and the House of Hathor, will appear in Issue #24 of Larry Welz's Cherry Comix!
This isn't state-of-the-art CGI and it isnt supposed to be, just a fun story.
Well, back to the drawing board, modeling apps and so on. I have 8 more characters to build before I can finish the chapter.
Posted by Reed Waller at 12:52 PM No comments:
Email ThisBlogThis!Share to TwitterShare to FacebookShare to Pinterest 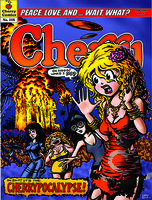 That's right, Larry Welz is back, and so am I, with Cherry #23, the first issue published in 20 years. Cherry is resuming publication, and I will be appearing in Cherry with installments of my new story, "The Flower Chamber. This issue I'm on the back cover, and the story will start next time.


Posted by Reed Waller at 8:01 PM No comments:
Email ThisBlogThis!Share to TwitterShare to FacebookShare to Pinterest

The House that Hathor Built 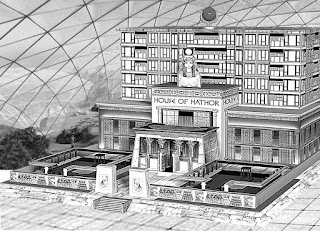 Well, with all the stuff going on, I'm still managing to plod along with "The Flower Chamber." It's a good thing I had no idea what I was getting into. After months of research, I started preparing for the visuals. At last I'm making some progress. This is a test rendering of the far-from-completed exterior of the House of Hathor. Some textures have been finished, but a lot more work needs to be done before I can use it. The gardens will need greenery etc. But I'm almost ready to actually draw Page One.
(The tiny figure entering is Omaha)
Posted by Reed Waller at 3:25 AM No comments:
Email ThisBlogThis!Share to TwitterShare to FacebookShare to Pinterest

News from Verlag Schreiber und Leser, German publishers. Translation of Omaha the Cat Dancer is proceeding apace, and for those interested, this edition will be available worldwide. Just in German. So technically, Omaha is soon to be back in print. The first of four 256-page volumes will be released early next year. It will be a limited edition of 1,500 copies. Cost approx. 30€.
Posted by Reed Waller at 10:01 AM No comments:
Email ThisBlogThis!Share to TwitterShare to FacebookShare to Pinterest

"The Flower Chamber" is taking shape

THE FLOWER CHAMBER is the working title of my new series, which stars Omaha as The Goddess Hathor Reborn, in a Domed City of the Future after the Great Economic Collapse, trying to make it work between Men and Women in an uncertain world, from an Egyptian palace under the dome where love is being dispensed for free.
This is a piece that is partly Science Fiction and partly allegory, and of course it is adults only.
After a lot of beginning research, I seem to have turned a corner. Now the story I believed on-and-off that I had, is starting to emerge, in big surprising bursts. There's a lesson here somewhere, something like, when something grabs you hard, stick with it and believe in it no matter how crazy it seems. Things that caused me to believe my story was totally absurd, have emerged as important plot points, and things that came up to stymie me have popped into the story with a meaning that I didnt even suspect until i did more research, and connections I made that i thought were foolish have turned out to have historical or mythological significance and belong in the story for reasons I only found out later. In the end, of course, i'll smile and do the cat thing, of saying "oh yeah, I meant to do that." When really, stuff just keeps falling in my lap.
Here is a promotional drawing of our star, Osanna (aka Hathor) in Her palace, which will appear on the back cover of Larry Welz's upcoming Cherry #23.
I will post developments as they occur.
Posted by Reed Waller at 8:23 AM No comments:
Email ThisBlogThis!Share to TwitterShare to FacebookShare to Pinterest

I've been reading this stuff my whole life, but I've never had to write any. When we did Omaha, Kate and I didn't have to make anything up, we just gleaned stuff from our own lives and the life of the city we lived in. We were never short on material. We didn't have to do any world-building.
I'm pretty good with dialog, but I'm not used to the Herculean task of world-building like my SF writer friends, my gaming friends, my fantasy writer friends, or my superhero comic writing friends. And to make things worse, I haven't been paying that much attention to the CURRENT world I live in for it to be useful. So, study study study, search search search, learn learn learn. I have characters, I have a mise-en-scene, but i'm nowhere near having a story. Before I have that, I'm going to have to put the characters in the setting even though it's far from fully realized, and see what happens, and what comes charging in from offstage. And everything that happens brings me to a new juncture where i have to go back to the research and do more construction.
I haven't even been to the drawing table yet, but my studio is just shoveled-out enough so that I can get in there as soon as i have to.
Posted by Reed Waller at 11:44 PM No comments:
Email ThisBlogThis!Share to TwitterShare to FacebookShare to Pinterest

Well, here we go. After decades of isolation, i thought I was safely dead and buried for the second time, but someone has goaded me into activity at my advanced age.
While I am assisting in the production of a German revival of Omaha the Cat Dancer, I am now also hard at work on a new project and reviving my signature character.
Heaven help me, it is turning out to be science fiction story! I didn't mean for it to happen, but that's how things go. Now I'm up to my cat's ears in research, not just on the recent trend of Cli-fi, but several other story-related things such as the zigzag history of feminism, alternative economies, and other controversial topics that have a dizzying range of possibilities.
The new star, a probable descendant of Omaha, will be the head of an unusual conclave (some will say a cult) within a future city-state. More later. Egyptian mythology will be involved, in the same metaphoric way that the woman is a cat. More later when I have art.
Posted by Reed Waller at 11:43 PM No comments:
Email ThisBlogThis!Share to TwitterShare to FacebookShare to Pinterest Okay, I just heard from Denis, and apparently, we have a deal with the German publisher to reprint the Complete Omaha the Cat Dancer in Germany (in German of course). We have to get our digital originals to them, but it looks like it's going to happen, and the money is reasonable. This comes at a great time when both Jodi and I have some medical bills to pay, as do we all. More news as available. (I will also be posting this on my blog and website and Yahoo group.)
Posted by Reed Waller at 11:52 AM No comments:
Email ThisBlogThis!Share to TwitterShare to FacebookShare to Pinterest
Older Posts Home
Subscribe to: Posts (Atom)